After years of collecting the various supplements that Games Workshop has released for Warhammer 40,000, I was interested to know how compatible the missions would be in the latest edition.

For my test mission, I decided on Rampage from the Dark Vengeance boxset. The reasons for choosing this mission were simple:

With the mission decided, it was time to get the board set up. The original mission suggests a playing surface of 24″ x 24″. Unfortunately, the playing surface that came with the First Strike starter set is only 22″ x 22″ but I decided that the rule of cool applied and so accepted the lack of a couple of inches.

All of the Crimson Slaughter units from Dark Vengeance are in use for this game, so thats:

The Helbrute acts under specific conditions:

I’m using Index: Chaos for this and so I’m giving the Helbrute its crazed special rule (after any phase where the Helbrute has suffered an unsaved wound, on the roll of a 6, the Helbrute will shoot or attack a unit in range).

The Helbrute starts in the middle of the board. All of the other units can setup anywhere that is more than 6″ away.

The Helbrute moves towards the closest unit, Sect Anarkus and blasts one cultist to slag.

He then charges into them and crushes the flamer carrying cultist after an ineffective overwatch. 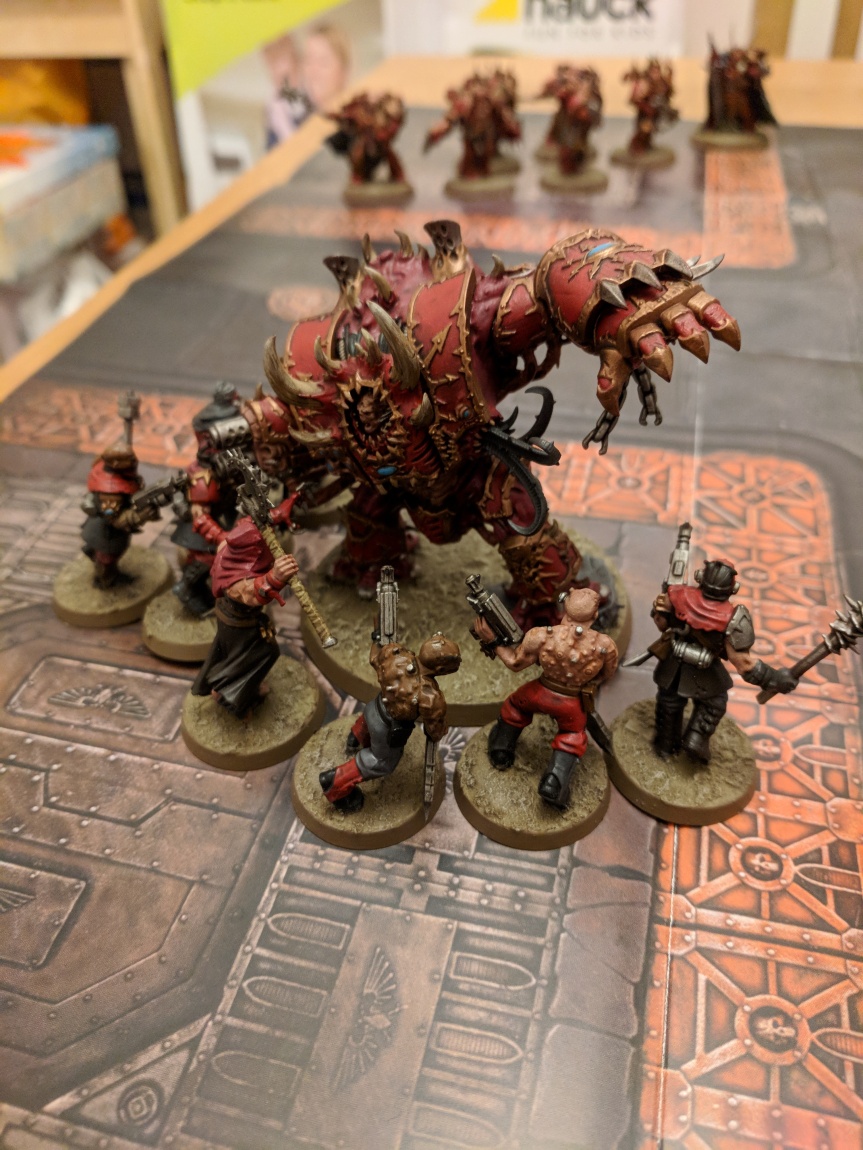 The remaining cultists of Sect Anarkus pile in and hope to do some damage against the Helbrute. In this edition, there is no “our weapons are useless” and the cultists have every chance of hurting the Helbrute, but fail to do so.

In the Chaos Space Marine turn, Sect Anarkus drop out of combat, leaving the Helbrute open to fire from the rest of the Crimson Slaugther force.

The Chosen manage to take 2 wounds off of the Helbrute. Kranon, fearing an exploding plasma pistol fires on the standard setting and fails to wound.

Using its crazed ability, the Helbrute fires and vaporises another cultist.

The Helbrute ends another cultist before charging into combat and ripping one apart with its Helbrute Fist. 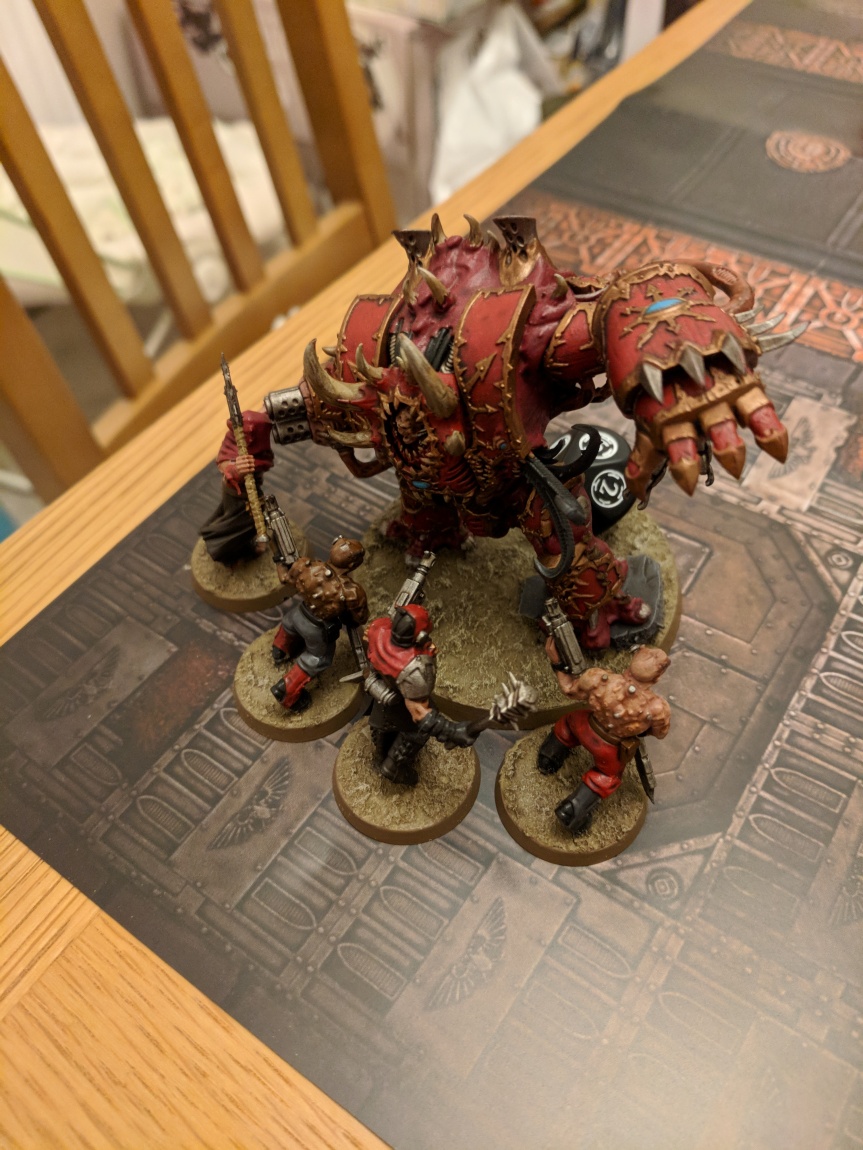 Once again, Sect Anarkus pile in and fight for their lives before 2 cultists realise that they’re not prepared to meet their gods and flee.

Sect Anarkus fall back from combat once again, while the rest of the Crimson Slaughter open up with their guns.

The Chosen take off 4 wounds with their shooting. 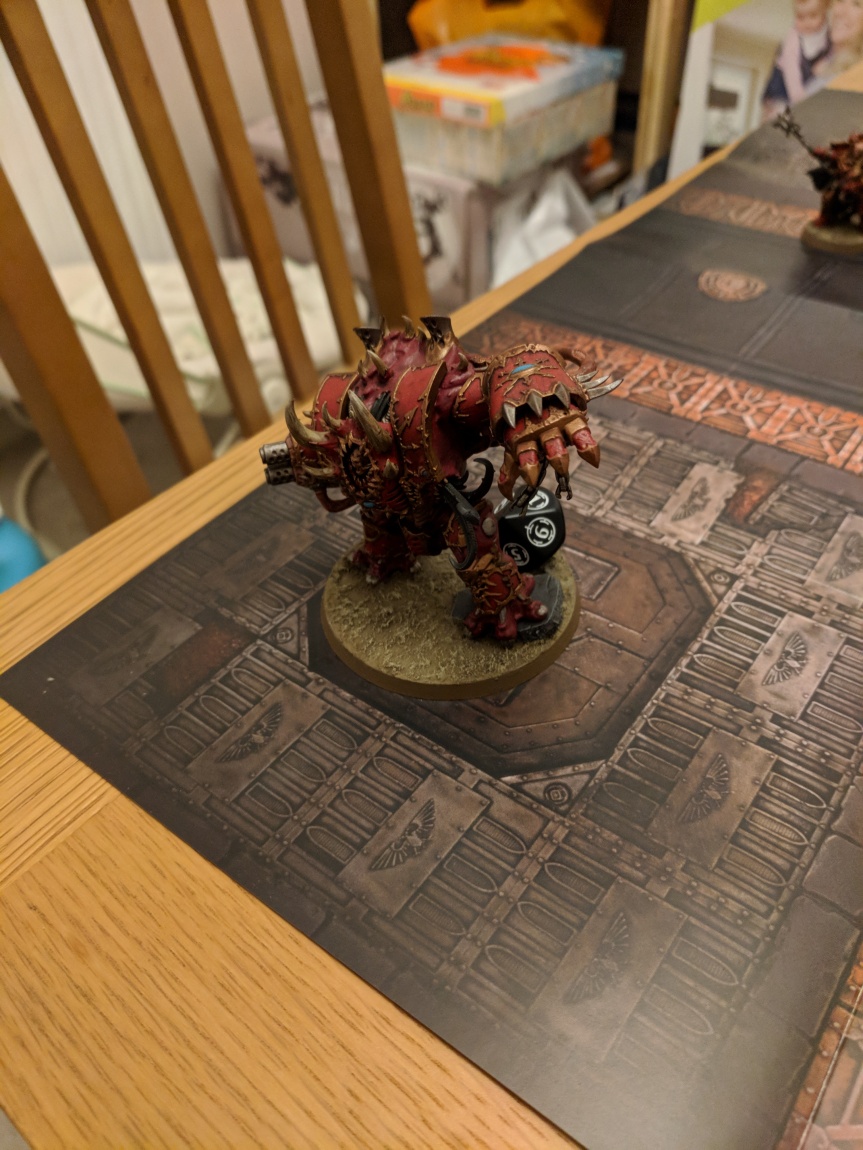 Kranon brings the Helbrute down to its final wound with a well aimed plasma shot.
The crazed Helbrute blasts one of the remaining cultists from Sect Anarkus. Sensing his end near, Anarkus does a runner.

The Helbrute moves towards Sect Tetchvar but fails to hit anyone with its multi-melta. He then charges in, shrugs off the overwatch fire and dispatches 3 cultists.

Sect Tetchvar fight back but fail to damage the Helbrute.

Kranon the Relentless senses his moment and charges into the combat. He strikes the Helbrute 4 times… 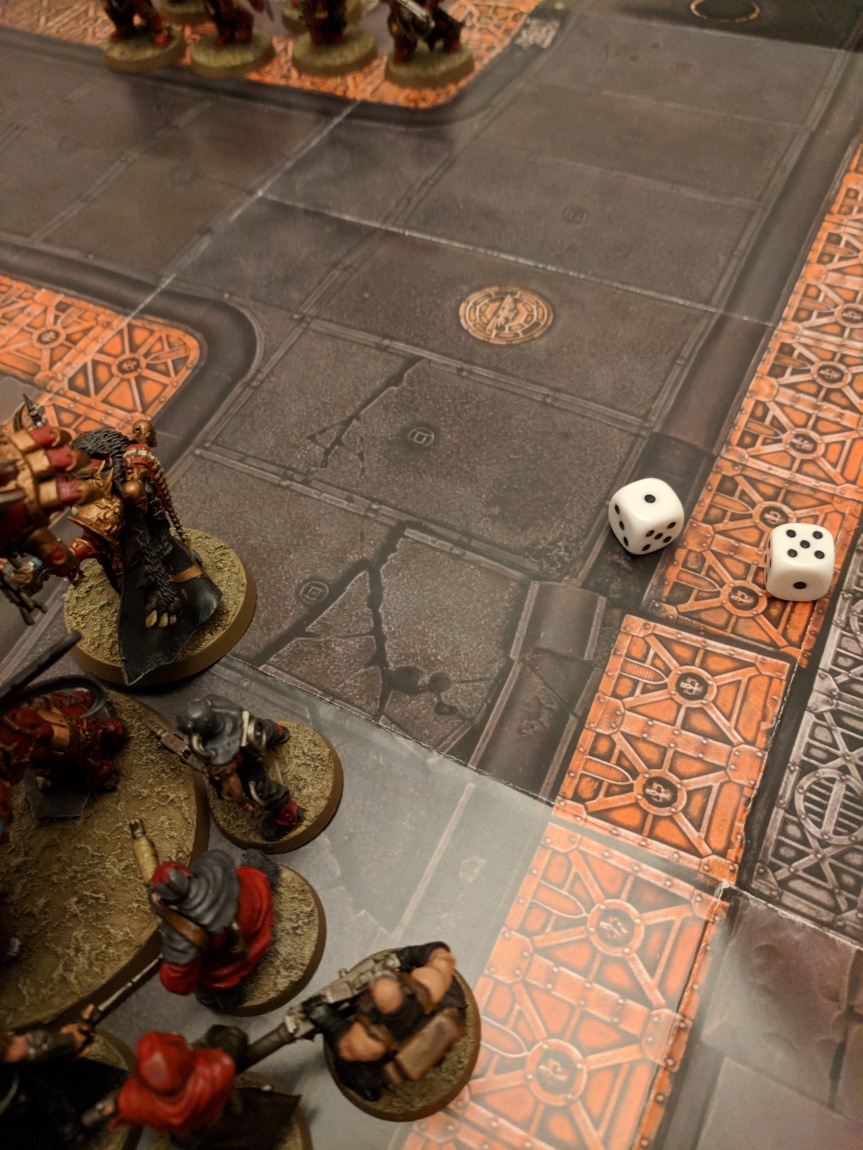 And manages to deactivate the Helbrute.

So, with the dust settled, the question remains – Does it 8th?

8th edition has dramatically changed this mission, but it still works. Although the Helbrute is more at risk from damage from all of the weapons in the Crimson Slaughter’s arsenal, shooting wise, it gets a 3+ save from everything except Kranon’s plasma pistol. The Chosen never got anywhere near to him to test their melee weapons against the Helbrute, but then they didn’t need to.

Because there is no chance of the cultists losing combat and fleeing, they were much more durable and being able to fall back from combat to allow the Chosen to shoot at the Helbrute was the winning tactic. Giving the Helbrute a flamer in its Helbrute Fist would remove the cultists far quicker and make this more of a challenge for the Chosen.

So that’s what I did! 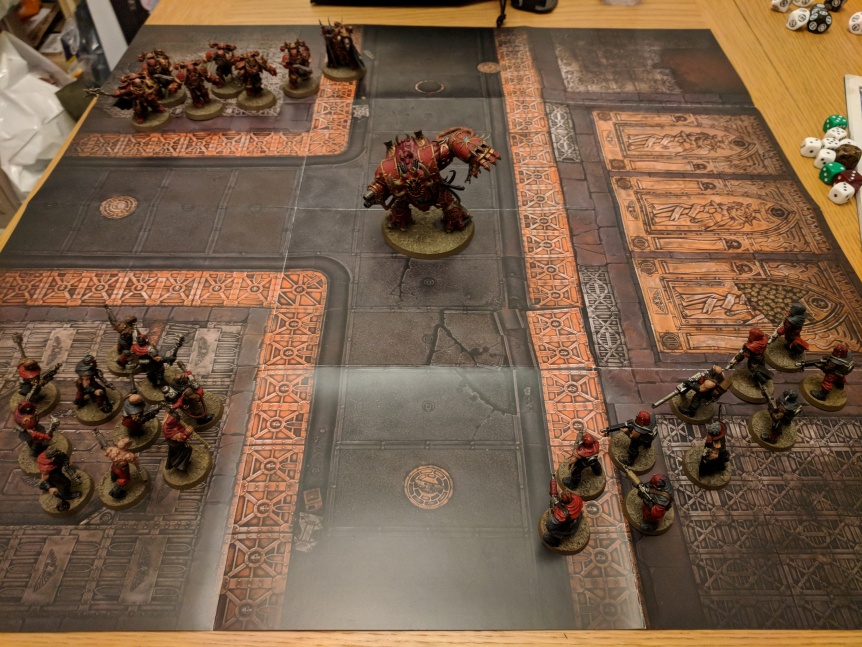 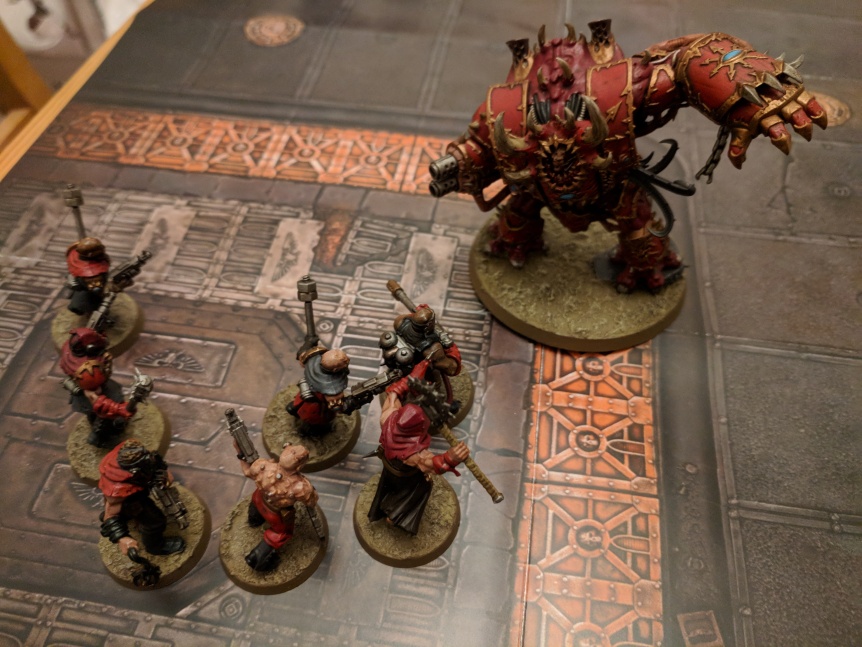 The Helbrute again goes after Sect Anarkus, blasting apart 1 cultist with it’s multi-melta and setting another 2 on fire with it’s flamer. 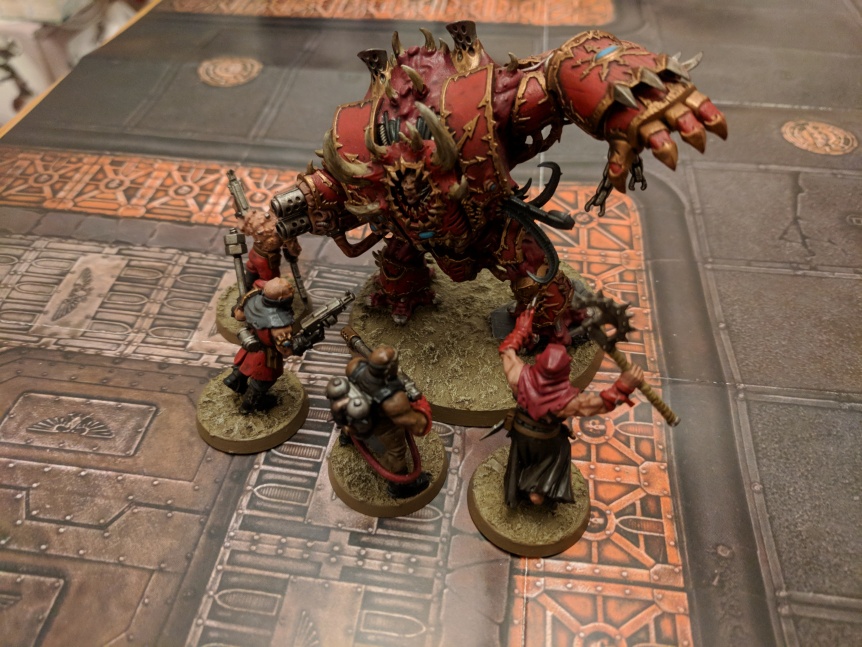 The Helbrute crushes 3 cultists in combat. This deadlier Helbrute is too much for the remains of Sect Anarkus who flee in terror.

The Helbrute is now left out in the open…

And Kranon and the Chosen use this to their advantage again, bringing the Helbrute down to 4 wounds. 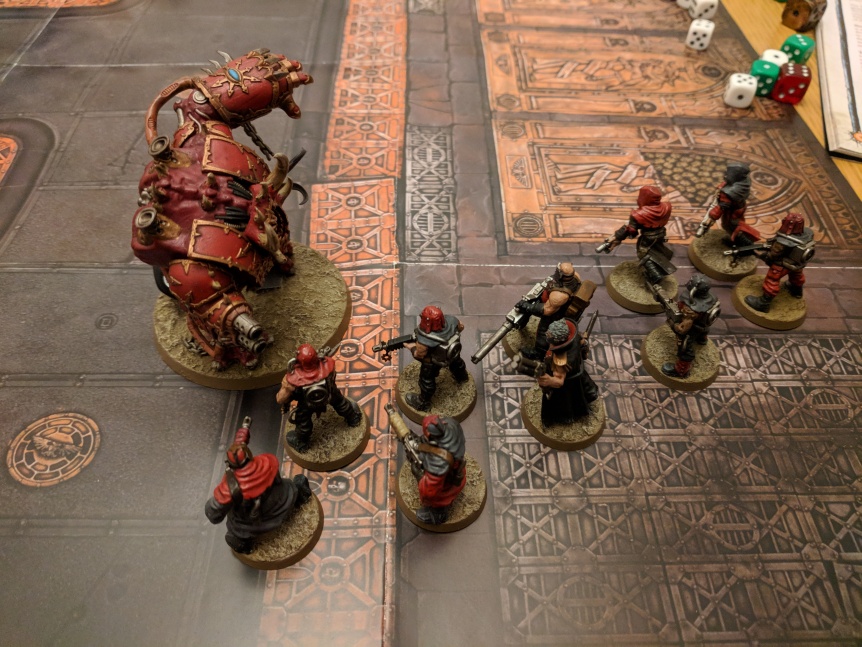 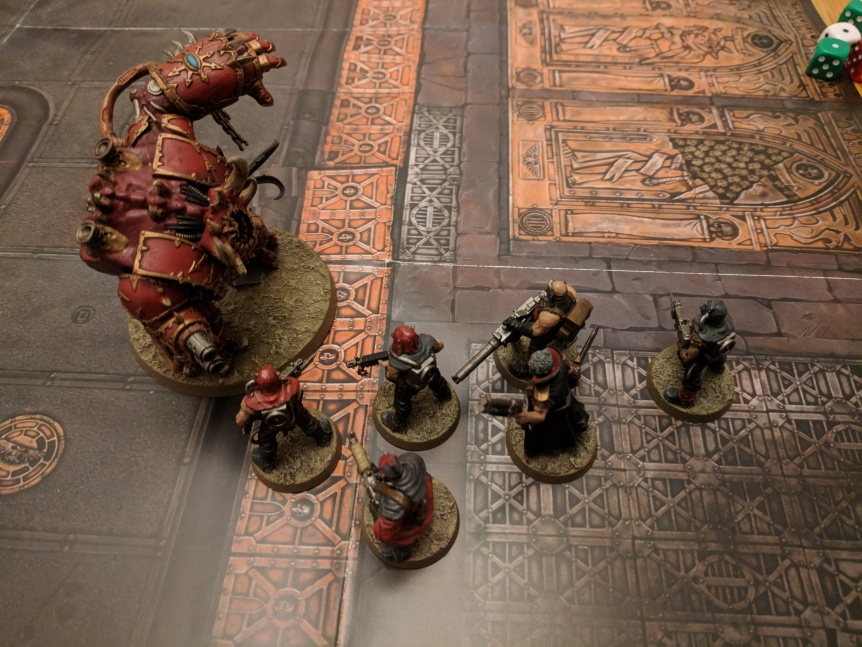 And burns and melts 4 of them. 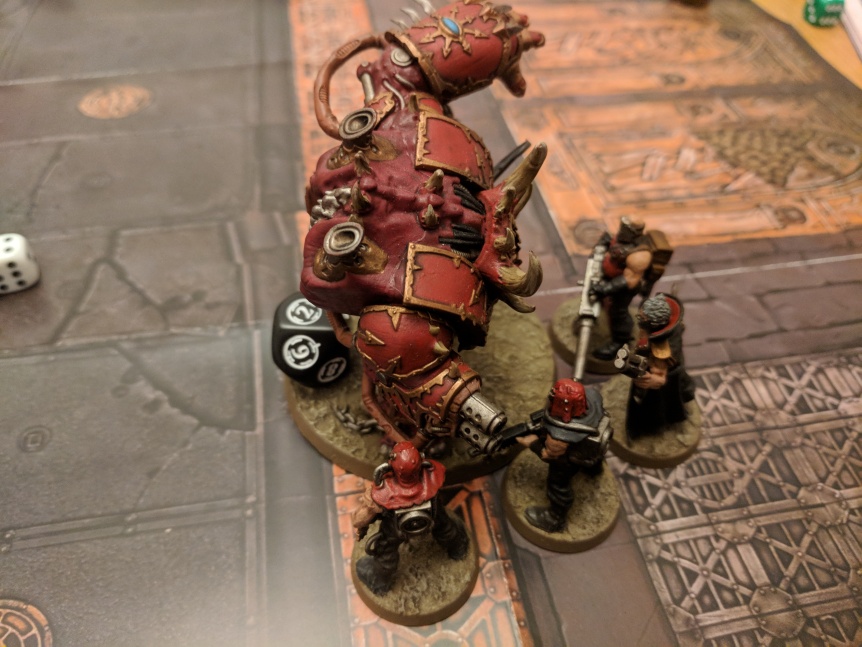 The Helbrute loses 2 wounds to overwatch(!), charges into combat and kills another 2. 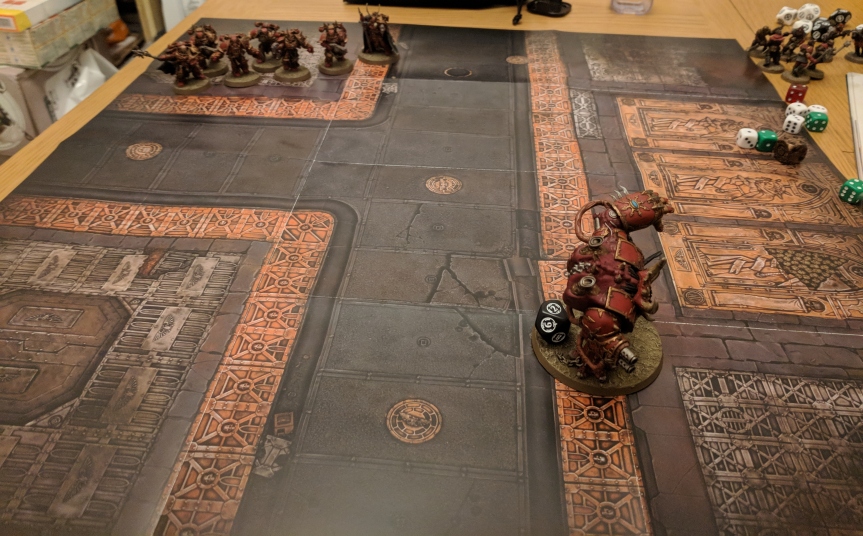 With the Helbrute again left in the open, the Chosen advance, hoping to remove 1 more wound… 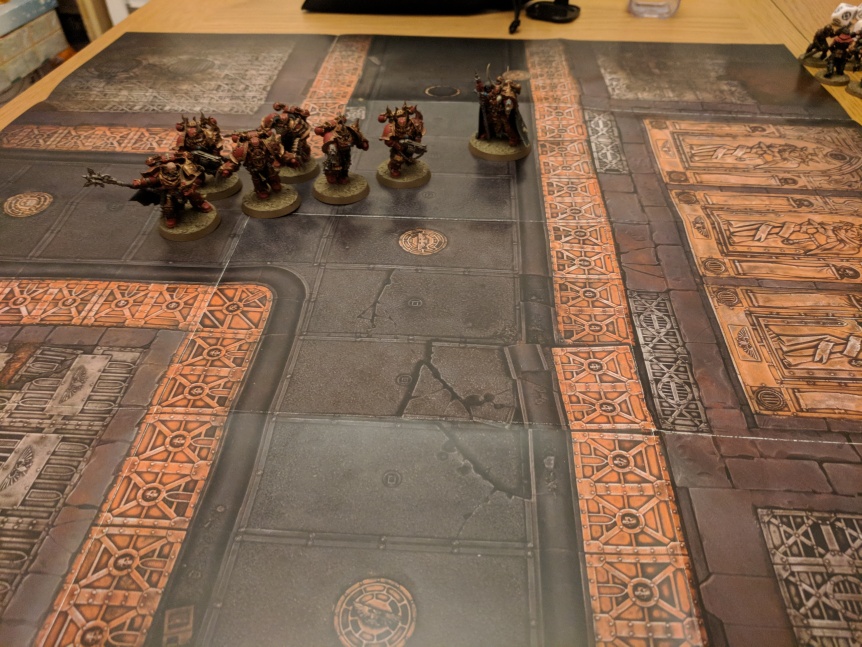 Their shooting proves far too accurate, and against Kranon’s wishes, destroy the Helbrute.

This game looked like it was going to be much better for the Helbrute, (had the cultists not been so effective with their overwatch) but it is likely the Chosen would still have ended out on top. The damage they were able to do with their Boltguns being too much for the Helbrute, who would have struggled to close the distance.

The Rampage mission was designed to aid in the learning of the rules and I still think it works as a mission. Next time I’d like to see how the Chosen fare against the Helbrute in combat.