​Well it’s been 6 months since I attended my first tournament and still I’ve not gotten round to writing up about it.
Well before we sweep it completely under the rug, a very brief summary.

The tournament consisted of 5 games of Warhammer 40k at 1000 points a side. 4 of the games were eternal war missions with 1 malestrom of war. The eternal war missions had a slight twist in that any objective secured unit holding an objective earned an additional Victory Point.
As a tournament it was quite a laid back affair and not as horrible an experience as I thought it would be. I also did not get my arse handed to me every game and walked away with 2 wins out of 5 ratio. Not bad for my first innings.

What did I learn from the tournament?

Pay attention to the mission rules as Victory Points are key and bring more boyz.

As the only Ork player at the tournament I was shocked to find that in most games, I was out numbered. I had brought a list with a little bit of everything that was therefore, not very good at anything.

I decided that next time, I will throw balance out of the window and do what orks do best. I’ll take as many boyz as possible and run at the opponent. None of those fancy fliers for me!

So tournament number 2 has been and gone. This time Octoberfest.

Once again, 1000 point limit, no allies and only one lord of war allowed.

While after the last tournament I longed for a 3+ save I once again took Orks. Party because that’s the army I get most use out of so I’m more familiar with their rules but also because if I don’t play orks, who will?

Once again, I’m pleased that I did as I was the only Ork player.
I initial wrestled with giving all of the boyz a 4+ armour save. But after the last tournament where there seemed to be a lot of grav or plasma, there didn’t seem to be much point as they would never get the save. Plus, at an additional 4 points per model where the model is only 6 points, it’s much better just to take more boyz.
But how was I going to make the boyz survive? There was only one answer: Painboyz.

A 5+ feel no pain is better than the 6+ t-shirt save and in most instances won’t be ignored.
Orks shouldn’t go anywhere without a Warboss so I needed a formation that will allow me to take as many HQ choices as possible. Fortunately there is the Ork Warband formation. 3 HQ choices and 3 Troops were the restrictions. This also meant no objective secured for my troops. 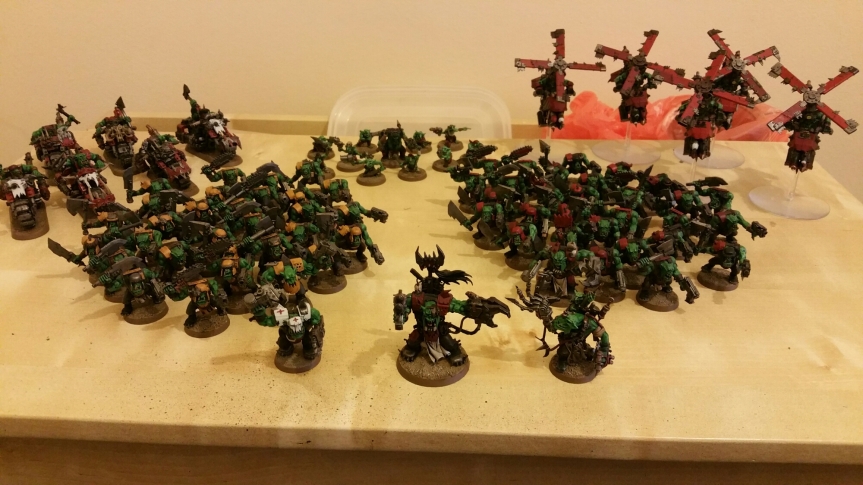 Painboy in each of the boyz squads. Warboss in the one without bosspole.

Deffkoptas to outflank if I go second. So that they can come on and destroy tasty targets with rear armour shots.

Bikes to try and grab objectives and to be the sacrificial lambs as my opponents are likely to focus on them.

Run everything else at my opponent and overwhelm in combat.

My aim for this tournament was to do better than last time. If I walked away with 3 wins I would be happy.

How did it go?

I won 4 out of the 5 games on the day. The game I lost was against a friend in game 2, who destroyed both my warbikes and deffkoptas early on. This gave him firstblood and because both units were on the same flank, I had no way to grab any of the far off objectives and nothing that could get near his warlord as everything else was foot slogging.

I made sure though that I grabbed all of the objectives that I could (instead of going all Orky and charging everything I could). This decision turned out to be quite important.
The overall winner of the tournament took a filthy list consisting of 5 Riptides.

Throughout the day, this guy lost at most one model in a game and that was mostly due to getting hot rolls. I believe he wiped out everyone he faced.
Fortunately I never got to face this list, although it would have been interesting having  the most numerous army facing the least numerous.
What it did mean was that everyone above me on the leaderboard did face him and got tabled. Leaving me to pick up second place and the runners up trophy.

Turns out that I only just got second place as there was only 3 points between me and my friend from game 2, showing just how important the decision I made to go for the objectives was.
Sadly I did not take many photos on the day.

I’m now looking forward to tournament number 3 in May. It is most unlikely that I will improve on a second place finish with Orks, so perhaps a new army is required…